Her appearance is somewhat extravagant when compared to other girls around her in terms of her hair and manner of clothing. Kaguya's long, curled in four main parts, silvery colored hair has a butterfly clip worn in her top left section of her hair. She has bright violet colored eyes and wears a lavender colored, four button jacket and a long purple skirt. At the back the skirt drapes along the floor but is shorter in length as the front so Kaguya can walk unhindered in her burgundy colored high heeled shoes.

Kaguya expected people present on the harbor to simply vacate upon her arrival since she intended to practice a Kandagawa jet race with her group. In light of Rin Namiki refusing to move, Kaguya was amicable enough to suggest a competition to settle the dispute.

She is from the Musashino Girls High School, which she attends together with Kuromaru Manpuku. She is a stereotypical rich girl.

Episode 1: The Kandagawa is Calling Edit

Kaguya is with Kuromaru Manpuku and a group of other people when she comes across Rin Namiki and Misa Aoi fishing. She thinks to introduce the ways things work around Tokyo when Rin shows no sign on leaving when requested, Confronting her up close, Kaguya suggests a Kandagawa jet race. 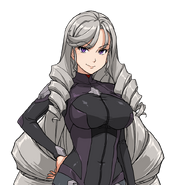 Add a photo to this gallery
Retrieved from "https://kandagawajetgirls.fandom.com/wiki/Kaguya_Shinj%C5%ABin?oldid=483"
Community content is available under CC-BY-SA unless otherwise noted.